Plunging yourself into ice cold water, waiting months on end for the perfect wave and being taken out by the cold, brown swell are just some of the challenges that Chris Kendall faces as a cold water surfer. We recently spoke to Chris about his story 'Confronting the Cold Coast' where he told us about the cold weather, the waves and the wipe-outs that mean surfing on the east coast of England is not for the faint-hearted.

You’ve been into surfing and bodyboarding since you were a kid. What is it you love so much about the sports?

When you first start, I suppose it’s a totally new feeling. Bodyboarding puts you so close to the wave and even when the waves were really small it was super exhilarating. And this is something you never really lose, because you can keep pursuing bigger and bigger waves, which refreshes this exhilaration.

But now my favourite thing about surfing is barrels. It’s clichéd but it is the holy grail of surfing. Once you do it, it’s a game changer! As, I’ve grown up and have had less time to get in the sea, I aim to surf when there will be barrels on hand. The experience of being inside a wave and coming out is one of the most incredible things. It’s as close to nature as I’ve felt and it’s something that the majority of the public never have, and never will experience. It’s pretty incredible when you think about the culmination of years of learning to put yourself in the right place in the perfect conditions.

Most of your surfing experiences happen on the east coast in harsh, cold conditions. Can you tell us more about the waves that you can catch on the east coast? And how surfing there compares to other parts of the world?

The best waves on the east coast often come at the time when the weather is at its harshest, as the northerly ground swells of the east coast are the same conditions which often bring snow to Britain.

The waves in general are also more powerful than a lot of places. I used to holiday in Cornwall every year and I always remember noticing when we came back how much more powerful it was on our coast. There’s a lot of variation though, even down to which beaches you’re surfing at – they all vary so much. 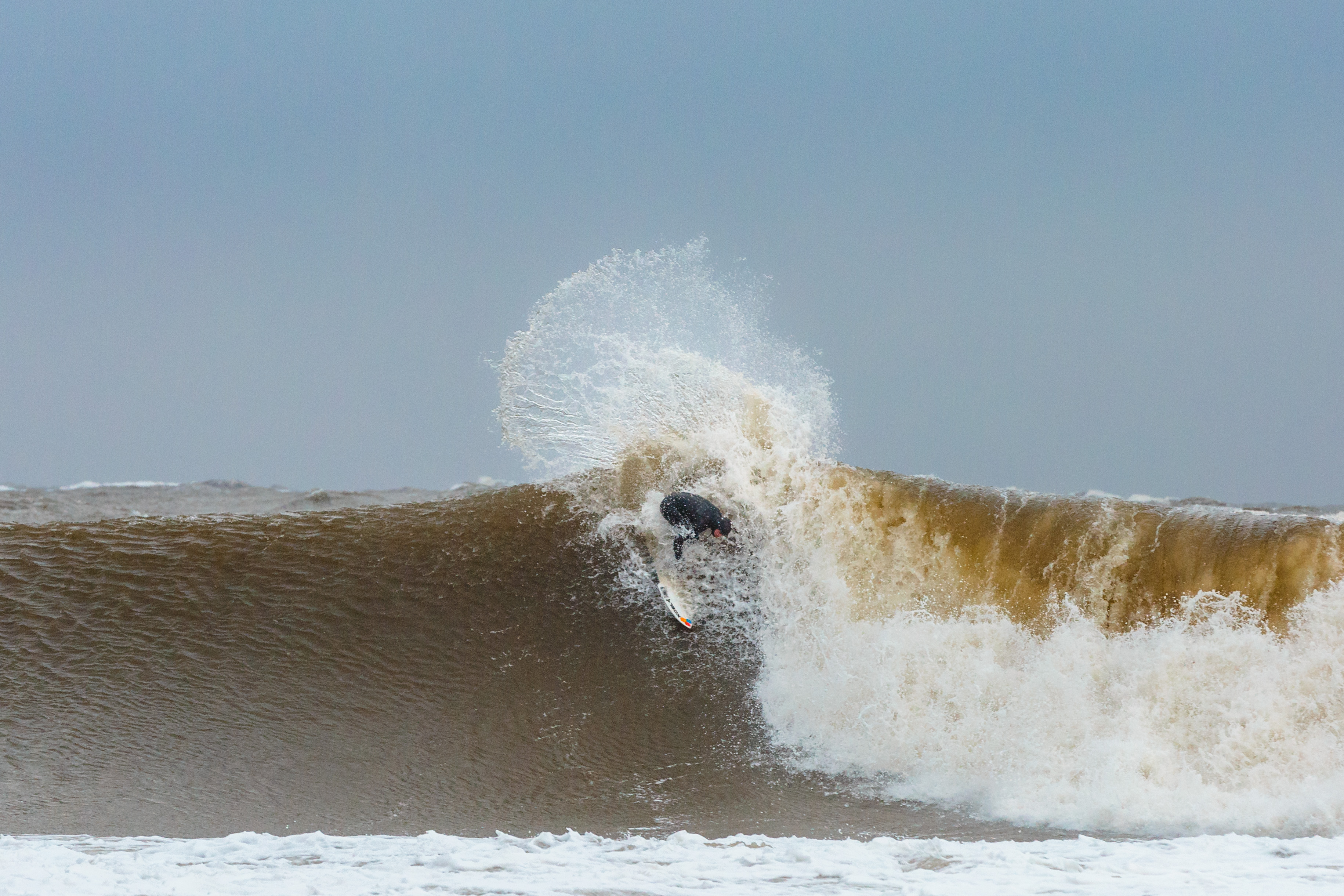 Whether it be mental or physical, I can’t think of anything rewarding I’ve done that hasn’t taken some form of endurance. Nevertheless, I don’t surf to struggle, it’s just a by-product that I realise is there. But the mental and physical difficulties definitely play their parts.

I can remember sessions where I’ve been really scared; I’ve had to mentally fight myself to get out and stay out. Other times you thrive of the adrenaline from being scared. One of the hardest things to overcome is when you’ve had a bad wipe-out.

It’s also hard to paddle out especially with with my scrawny little arms but at least with physical adversity, you can do workouts at home to help yourself out. The mental stuff is much harder on the east coast. As an average January sea temperature is only a few degrees higher than in Iceland, it’s grimy, cold and uninviting so inevitably our beaches are less crowded than somewhere like Cornwall. If people weren’t deterred by the conditions, you’d expect it to be at least as busy as places where it’s not as harsh.

Clearly, you are not someone who is deterred by the cold conditions. How are you able to cope with the cold, harsh weather?

Luckily, wetsuit technology has come on a lot in recent years, it’s much easier to cope now than 15 years ago. Nevertheless, spending a lot of time sitting, waiting for waves (as you have to on the east coast) can make you cold really fast as your wetsuit relies on you moving around and keeping that little bit of water that’s up against your skin warm.

If you dilly dally putting your suit on, this is when you get cold. You just have to confront it – it’s harder in the short term, but easier in the long! There are also more specific things you must avoid like putting a wet wetsuit on from a session the day before. Especially in the winter when the weather is so cold and it’s basically a form of self-torture, comparable to turning the shower gauge to ice cold! 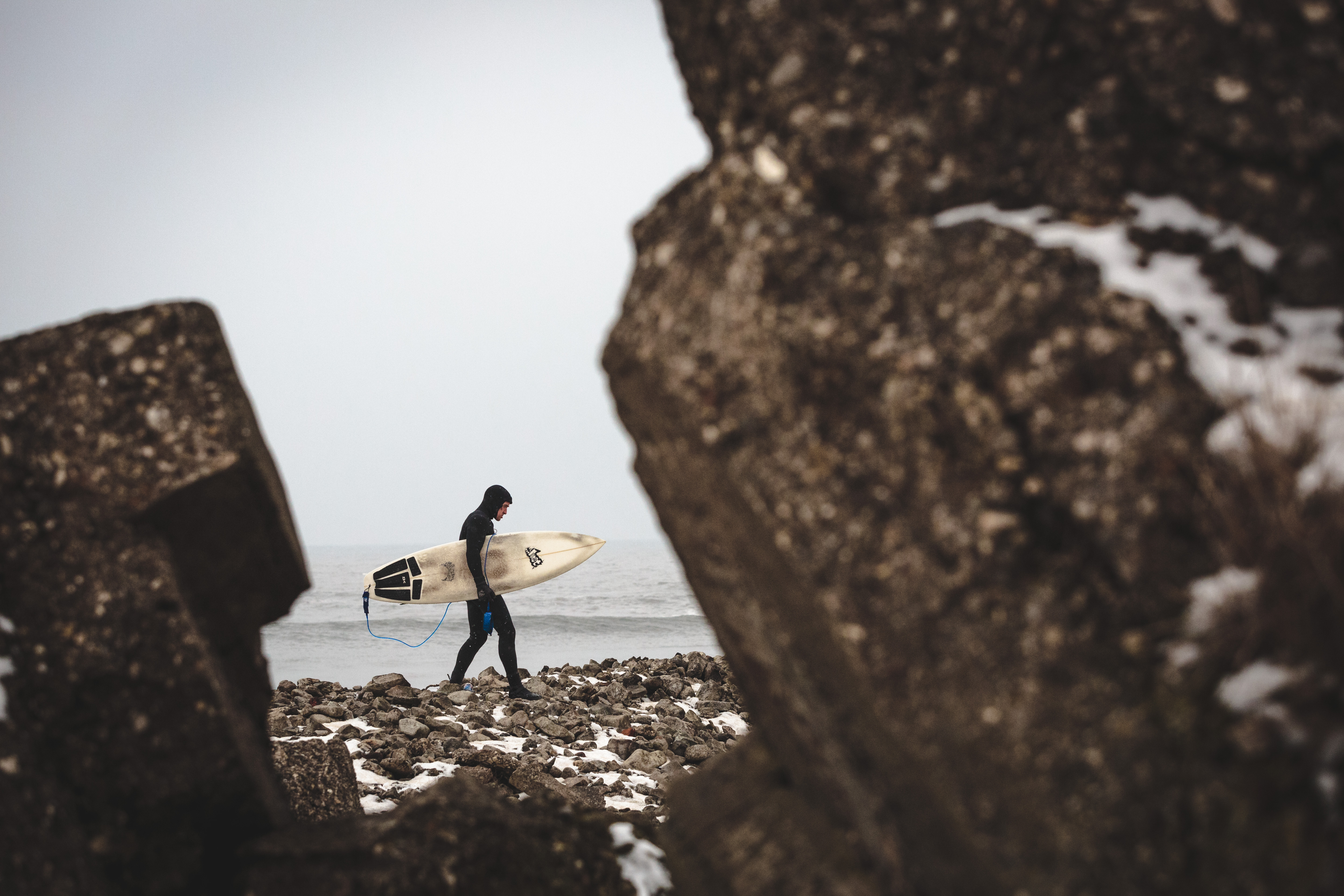 Aside from coping with cold conditions, you mentioned the long paddles. Why are long paddles such a challenge?

I’m nowhere near fit enough or built right for them. It’s endurance in a more traditional physical sense of just gritting your teeth and paddling, even when your arms feel like noodles! Other times, even where the paddle out is not hard, you spend the same session constantly paddling just to keep yourself in the same spot. There are occasions when other people paddle straight past me and I look like I’m on a treadmill – it’s the most demoralising thing ever!

Wipe-outs are a big part of surfing and mustering the courage to get back on your board after a big wipe-out is something ever surfer has to deal with. What is the scariest experience you have had with wipe-outs and how did you overcome it?

The scariest experience was a wipe-out which caused my breath to start running out. The surf was an entirely manageable size and I was having a blast. We saw a bigger set coming through and I remember being so anxious as it approached. I got lucky with the first wave: I managed to duck dive it and pop up on the other side, almost trouble free. I remember hooting and hollering as I came up on the other side as the adrenaline rushed through my body, I was no longer nervous about the next wave of the set but as I noticed it was going to break a bit further out, my confidence deserted me. I nevertheless tried to duck under it and remember getting pushed down. As time passed, the thought that I should have come up by now started to go through my mind. The well-rehearsed habit of relaxation went out of the window and I kicked for the surface. I remember going up and up and up, with every second that passed expecting to break the water’s surface, but it kept going for far longer than I expected. Eventually when I broke the water I gulped in as much air as I could and the next wave of the set was right on top of me, so I dived straight back under. Needless to say, I was ready to get out after this. It scared me and set me back to surfing much smaller waves for a good few months! 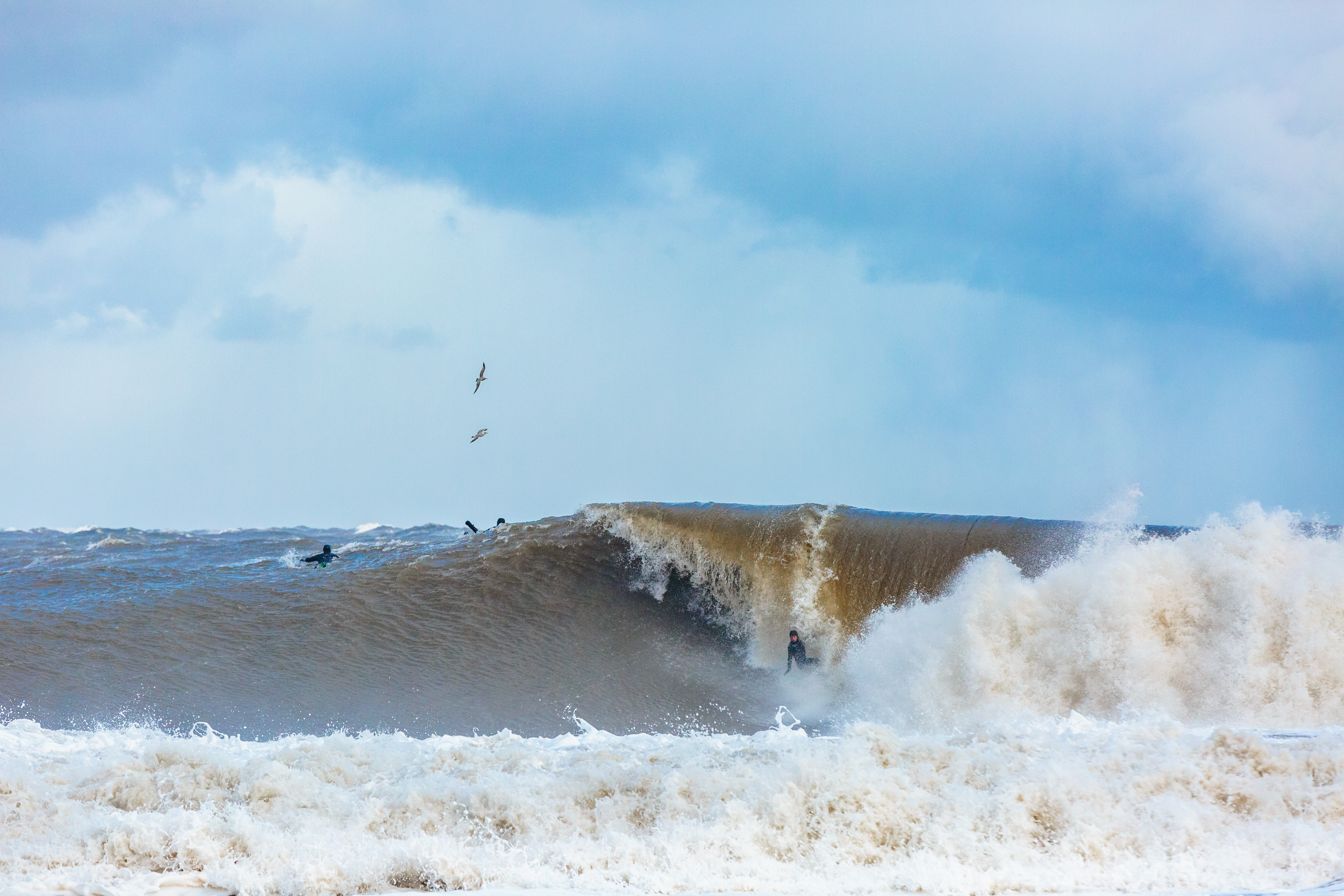 There are clearly so many different aspects to surfing on the east coast. What have you learnt from your experiences and how have they affected your mentality?

Surfing has shaped my life. I started at a formative time in my life and it shaped almost all of my decisions at that time, from my jobs to my hobbies. It has given me a sense of how everything is impermanent even if it doesn’t feel like it at the time and however bad something is, it will pass. The main thing that is directly attributable to surfing though would be a deep appreciation for nature. From a young age I appreciated the beauty of nature which has developed into a curiosity and love for life which pervades everything I do.

Finally, if you never surfed on the east coast of England again. What would you miss most about surfing there?

My favourite beach spot. Even though it’s not a secret, I’m not going to give it more publicity than it’s got so I won’t name it! It’s still underrated, particularly in certain conditions, but I’ve had so many good sessions and good memoires there at all stages of tide in all directions of swell. The beach has so much character too, it’s just a beautiful place.

Specifically though, I would miss the power of the waves and its ability to take swell conditions which are less than perfect and make them super fun. Although I’ve surfed waves as fun, I’m yet to find somewhere that is so versatile, with so many different faces. There are not many beaches that can provide waves as good as the east coast can. 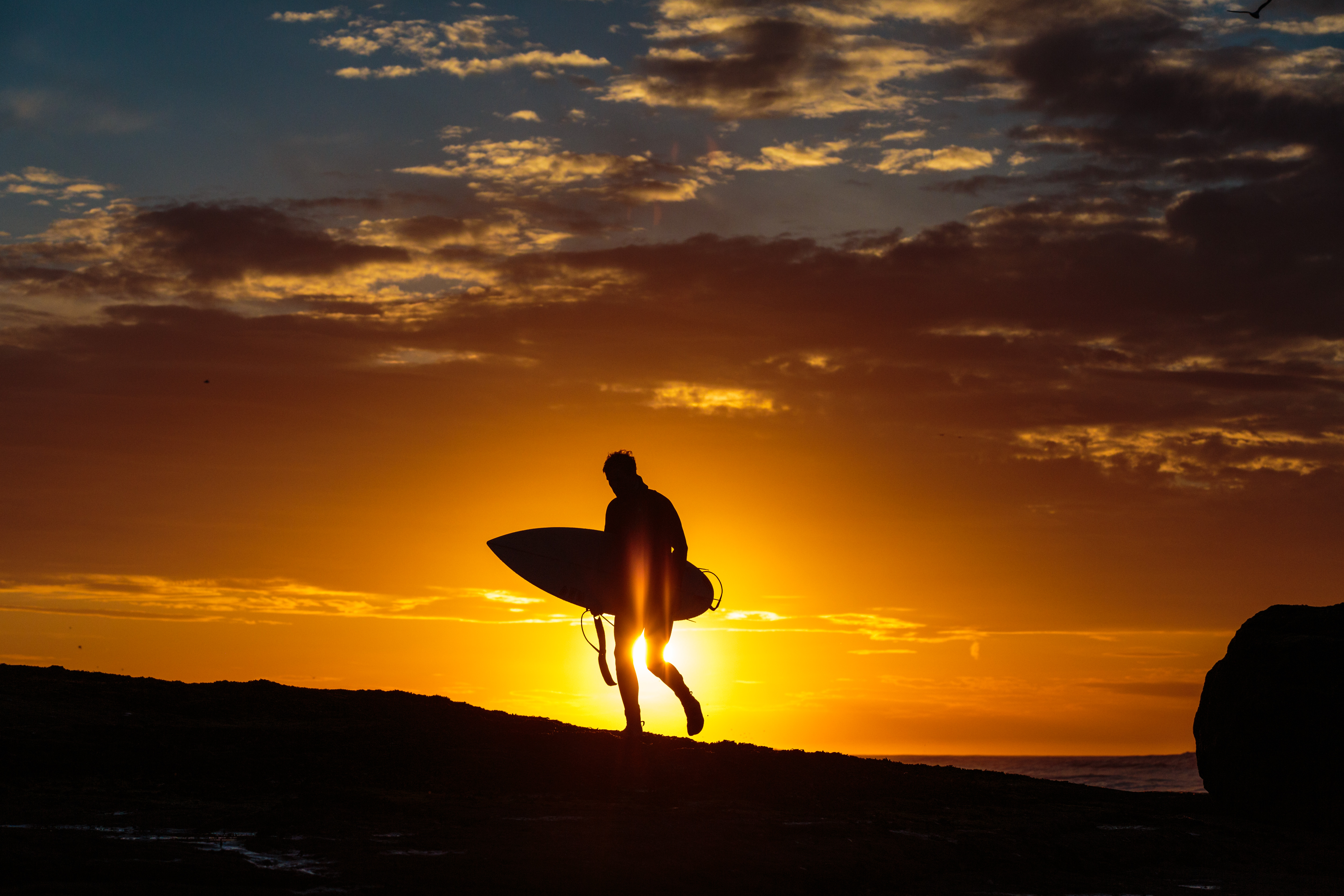