Co-founder and Head Guide for 360 Expeditions talks about preparations for his upcoming expedition to Everest via the north Col in April 2019. He successfully summited Everest via the South Col in 2016 and is looking forward to returning to the world’s highest peak.

Have you had to undertake any different training in preparation for your latest Everest expedition?

The best way to train for a mountain is to climb mountains! Luckily I climb a lot of mountains for my work. In the last 3 months I have climbed Stok Kangri (6,153m) in India, trekked to Everest Base Camp twice and summited the iconic Ama Dablam (6,812m). I’ll be spending January and February running winter expedition skills courses and climbing peaks in my home ground of the Pyrenees. This is normal fare for me and sure keeps me on my toes! The only specific training I do to get ready for 8000 meters is to eat a lot of food - the idea is to double my own body weight in as short a time as possible, but it never works!

What has been your favourite expedition to date?

I’d have to say the Great Trango Tower in the Karakoram mountains of Pakistan. The combination of incredible ice climbing on one of the biggest walls in the world with a good friend, sleeping in a snow trench under the mighty tower, the nail-biting Karakorum highway and the amazing Pakistani hospitality all made for an awesome adventure. 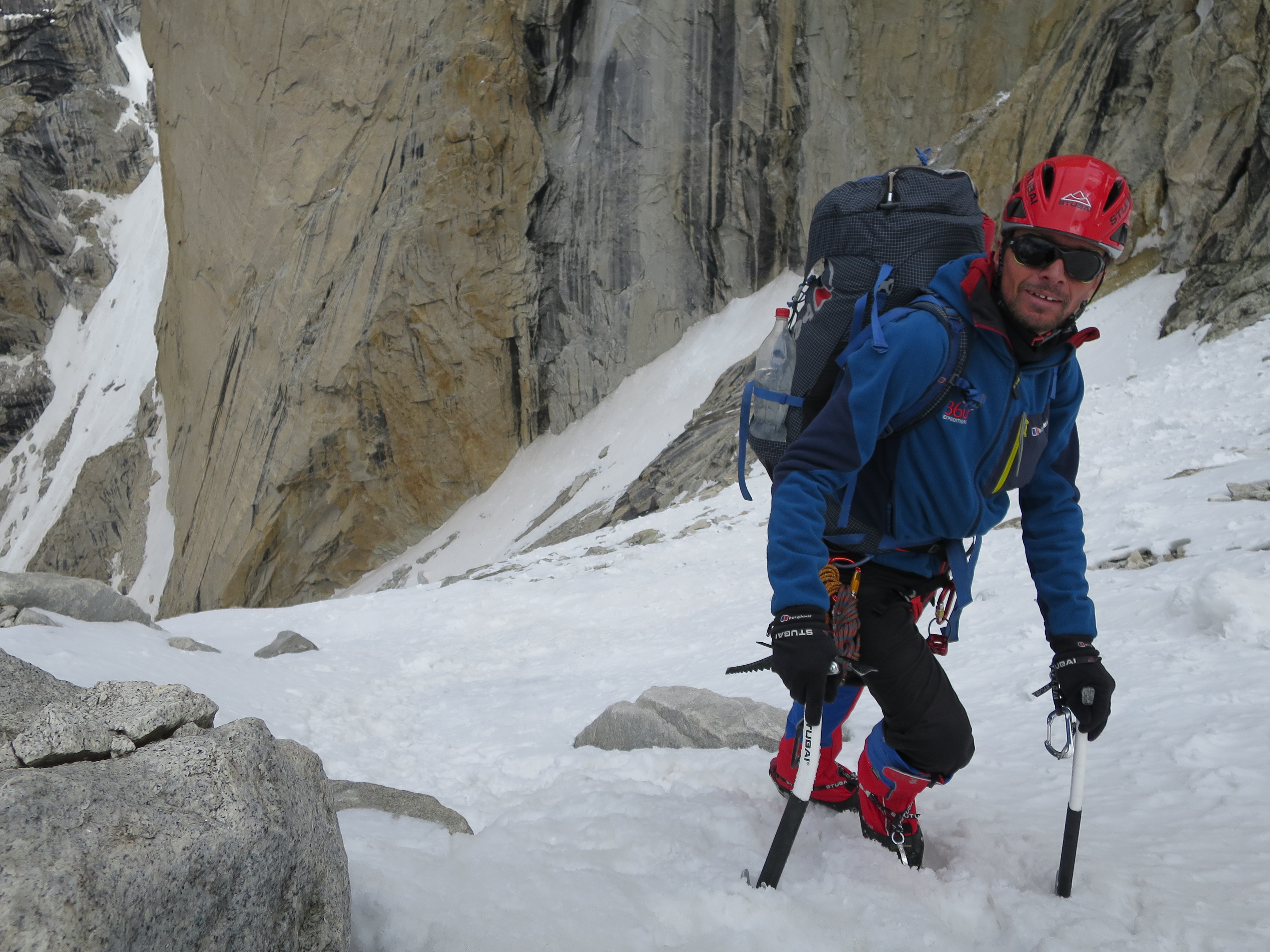 What has been the most challenging expedition for you so far and why?

My most challenging expeditions have been non-climbing ones, where I have been unfamiliar with the environments and had to learn different survival methods. Long river journeys into the Congo and Amazon basins and a sailing trip to Greenland spring to mind.

Having climbed since my teens, the mountains have always been familiar turf for me - but the challenging factor comes from doing them back to back. By the middle of next year, I hope to have summited Everest, the Khumbu 3 Peaks, Manaslu and Elbrus.

Someone once told me that I seem to do in 6 months what an average mountaineer would do in a lifetime. As a professional climber, this kind of intensity is not unusual but can’t be sustained forever. Keeping in shape both mentally and physically to pull each summit off successfully until you get to chill out again is what is challenging!

You have a passion for outdoor adventure. How did this start?

I have my parents to thank for the life I lead. They were very encouraging with whatever path I set out to carve for myself. We immigrated as a family from Holland to Australia when I was a little kid and my parents wanted to see as much of our new home as possible. We spent months exploring remote National Parks and wilderness areas, camping out and living rough. This ingrained a deep sense of wonder and love for the wilder parts of the planet. My passion for climbing sprang from that, as it combines adventure with being in amazing places.

What items could you not live without on a climb?

A powerful head-torch - things come to a halt when caught in the dark without one; a good book for sitting out storms and my pink handled technical ice-tool which I can use to set up belays and arrest people in a hurry. Energy snacks too! I’m normally forced to consume sugar heavy snacks so I’m looking forward to taking TRIBE bars with me on this expedition for a more natural energy hit.

What advice would you have for people interested in starting to climb?

Learn to walk before you run. Serving a proper climbing apprenticeship where you graduate from Trad climbing onto Scottish winter routes and then move to the Alps over a couple of years. Some people tend to want to go big-league straight away and climb monster routes in the Andes and Himalaya, but this can get you into hot water.

I have been involved in quite a few scenarios where we had to give up a route because someone who shouldn’t have been there got into trouble and called for help. Building a solid mountain sense that allows you to tackle a mountain on its own terms takes time and dedication. Paying for tuition by mountain Professionals and Expedition companies helps you enormously, not only in the development of mountain skills but how to cope with expedition life. Being storm bound in a tent for 6 days is a non-glamorous aspect of expeditions that no-one thinks about but can be made a lot easier if you have the right know-how! .

If you like trekking or are seasoned mountaineer and want an adventure in some of the world’s wildest places, check out www.360-expeditions.com